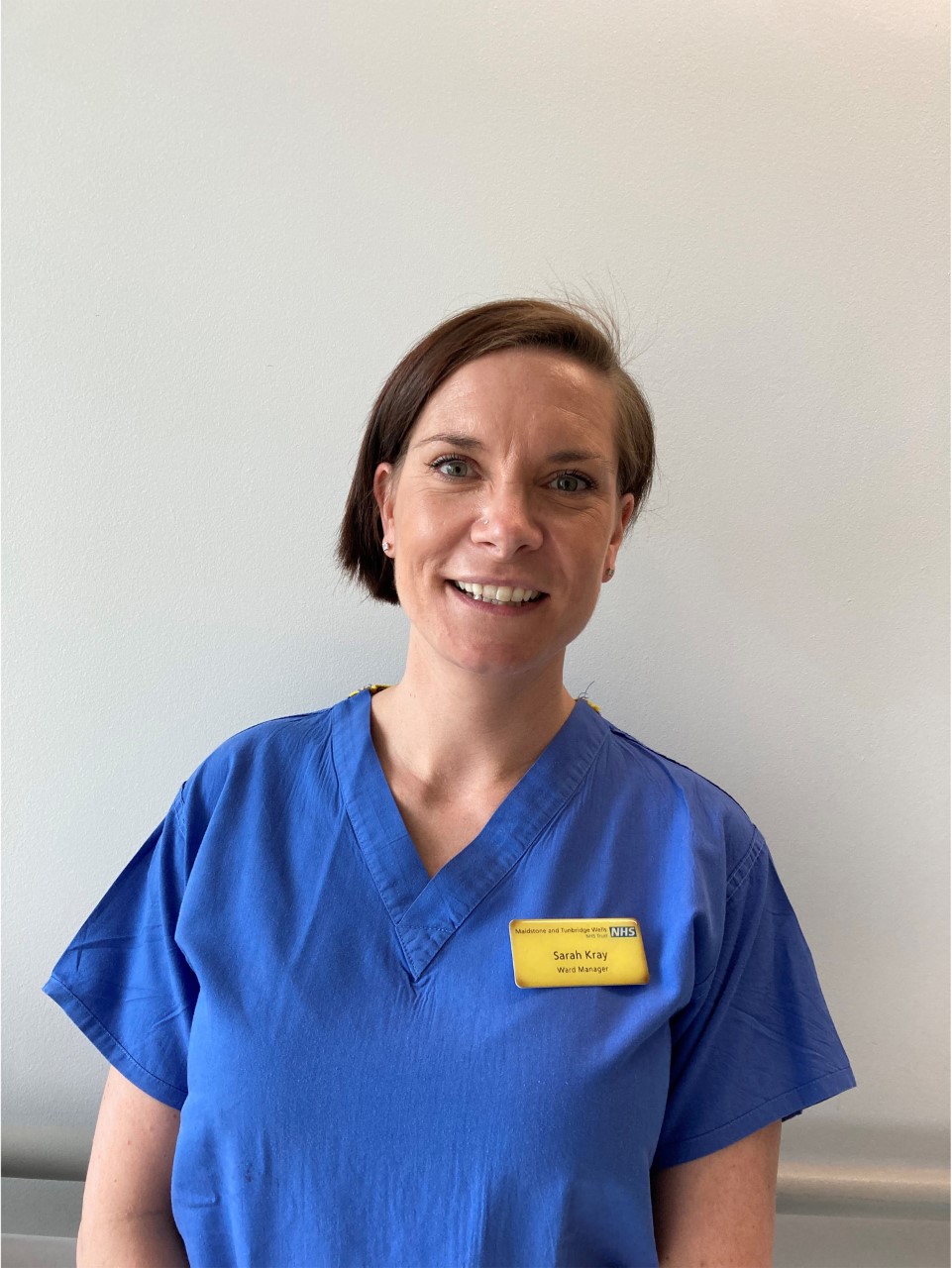 The Kent & Sussex hospital closed in 2011 and the new Tunbridge Wells Hospital opened, which later became part of Maidstone and Tunbridge Wells NHS Trust. It was the first NHS hospital to provide every patient with their own room, including en-suite facilities.

Sarah Kray joined the Kent & Sussex Hospital, when she was 19 in 2005. Now 35 years old and a ward manager she is keen to highlight the excellent career progression and support she has received from the Trust to advance her nursing career.

Sarah has in her words “always loved hospitals” and a career in nursing was an obvious choice, although when she left school after her ‘A’ levels and went to work for a cleaning company before applying to become a healthcare assistant.

She explains, “I had spent quite a bit lot of time in hospital when I was younger as I had problems with my ears, and I just loved the hospital environment. I had never thought of becoming a nurse until I saw a job advertised at my local hospital for a healthcare assistant and decided to apply.”

Sarah was successful and joined the hospital as a Band 2 healthcare assistant (HCA). She thoroughly enjoyed the job and realised that becoming a nurse was the career she wished to pursue. The Trust actively promotes career development and after a year she was encouraged to do her NVQ Level 2 in health and social care.

She passed this quickly and continued with her role as an HCA until she went off for maternity leave aged 21. She returned after her maternity leave to work 25 hours a week, which she could fit around childcare. During this time, she also completed her NVQ Level 3. After a few years though she realised she really wanted to up her skills and become a nurse.

Sarah says, “I am quite ambitious and after being back a few years I decided the next step up the career ladder was to do my nursing training. Once again, my manager and the Trust were hugely supportive, plus having the two NVQ’s helped as I don’t think I would have been accepted on the degree course without these.”

She started the Adult Nursing Degree at Canterbury Christ Church University in 2012 and graduated in 2015. During her studies she continued working at Maidstone and Tunbridge Wells Trust as a bank nurse, combining practical training with academic study.

Once she had finished Sarah re-joined the Trust as a registered nurse working on ward 21 an adult respiratory ward and a ward, she had previous experience of working on as an HCA.  This is an area of nursing that she is particularly interested in because it is highly skilled.

Sarah explains why, “Working on a respiratory ward is challenging but extremely rewarding. The patients I work with are very sick and in terms of the clinical skills needed it’s one step down from an ICU ward. We have patients over the age of sixteen who are having trouble breathing. They could have cystic fibrosis or asthma, or it could be someone with learning disabilities who is having problems swallowing which causes breathing issues.

“The reward for me is seeing these very poorly patients coming in and caring for them until they are better and discharged. This is what I got into nursing to do and it is a real pleasure to be able to see patients improve. In a way it can be a bit of an adrenalin rush as it is usually an emergency situation when they arrive and as team we have to work quickly, using all our skills, knowledge and training to stabilise them.”

In addition to her standard nursing skills, Sarah has developed specific skills for working on this ward that include working with non-invasive ventilation machines and doing high flow nasal oxygen therapy. She also highlights the importance of communication in her role.

After two years of being qualified Sarah once again felt it was time to progress and she became a junior sister on ward 21 in 2017. In 2019 she was approached by a matron of a different ward to do a secondment for six months as a ward manager. Sarah says this was the ideal training ground for her to ease into a management role.

She says, “The ward was for people who are medically fit to be released and are just waiting to be transferred out of hospital. It was more about providing basic care, rather than acute and it enabled me to learn all about being ward manager without the stress of working on an acute ward.”

Following the secondment, Sarah went back to ward 21 but left on maternity to have her second baby. She returned in April 2020 and took up a Band 7 Ward Manager post and now manages 30 nurses and clinical support workers (formerly known as HCA’s).

Her duties include ensuring the ward has appropriate staff with the right skills mix for each shift, managing staff training and development, as well as appraisals and managing sick leave, annual leave etc. Sarah spends about a third of her time working on the ward too.

She says, “It is important for me to work with patients and to support and guide staff clinically. I did not do nursing to sit in an office. I am happy that I have the flexibility and I can help the nurses out when needed. I did shifts over Christmas where I could when we were short staffed due to sickness absence for example.”

Sarah spends a lot of time on staff wellbeing which the Trust takes seriously. Since the pandemic the Trust has organised a lot of wellbeing support, including a wellbeing drop-in session every two weeks where nurses can speak with a psychologist and a Wingman tent where nurses can take a tea/coffee shift break. The Trust also provides free food and water, so staff do not need to buy meals, along with free acupuncture sessions.

Sarah is grateful that the Trust has supported her at every stage of her journey. She points out that she only qualified as a nurse seven years ago and already she is at Band 7 and is considering the possibility of becoming a Band 8 Matron in the future.

She says, “The Trust offers staff amazing opportunities, and each ward encourages people to progress, learn more and develop their skills. We have several Professional Development Nurses who ensure that all nurses are up to date with their competencies and suggest training courses that they could attend to further their career.”

The Trust puts all newly qualified nurses on preceptorship courses, and more experienced nurses will have a two-week induction when joining. Staff have their own online account too where they can access all courses, both those in the classroom and e-learning so they can progress their careers, as well as keep on top of any mandatory training.

Sarah highly recommends MTW as a great place to work. She says, “We’re like a family and there are still nurses here that were here when I first started. The hospital is diverse with people from all over the place, including overseas nurses and we all pull together as one team.

“We look after staff and the Trust has great HR support, with each ward getting their own dedicated HR advisor. Training and development opportunities are superb, and you can progress as quickly or as slowly as you feel comfortable.”

Other benefits include pay which is at the top of the band and matches London pay, enhanced pay opportunities for unsocial hours/weekends and at key times of year, NHS pension and a Blue Light Card for access to a wide range of discounts, benefits and deals.

Sarah adds, “Tunbridge Wells is also a great place to live. It has good transport links with London as well as being close to the coast. Kent is known as the Garden of England, and it really is. It is very green and there are lots of interesting places to explore.  There are fantastic schools too – 33 secondary schools have been rated as outstanding[iii] and housing is more affordable than London.

“For nurses either at the start of their careers or those who are looking for a new role and the opportunity to thrive in a supportive environment then it’s hard to beat. I really can’t see myself ever working anywhere else, and I’m so glad that I took that first step when I was unsure of what I wanted to do and climbed the nursing career ladder to where I am today.”