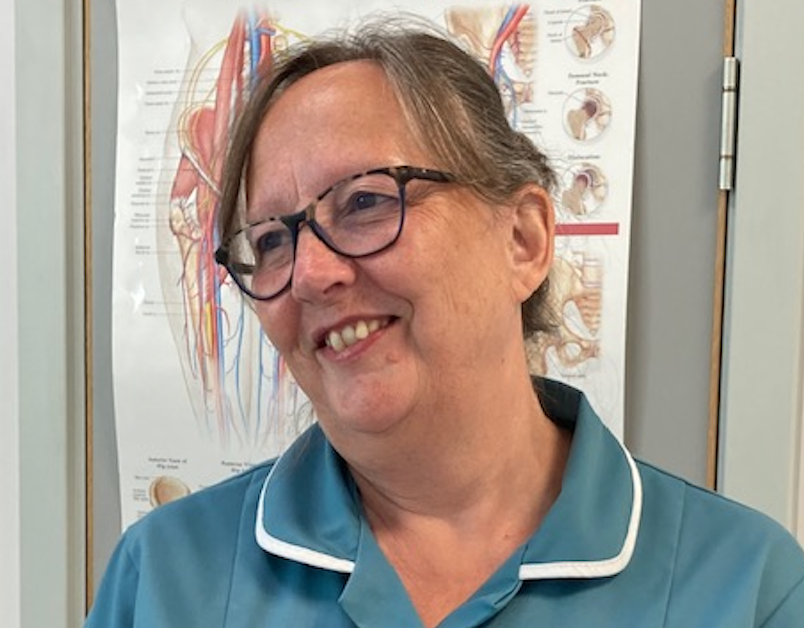 Louise always wanted to be a nurse and when she was 18, she did an Enrolled Nurse course at Worthing Hospital, qualifying in 1986.

Louise says, “From about the age of three I started telling everyone that I was going to be a nurse. I never really wanted to be anything else, so I started my training in Worthing, East Sussex although I’m originally from Surrey.”

Louise stayed at Worthing for six months, before the Nuffield in Tunbridge Wells. She later did a conversion course from 1993-94 to become a registered nurse.

In 1997 she had her daughter. She carried on nursing at the Nuffield until 2000, and then joined the Bank at Pembury Hospital, now part of Maidstone and Tunbridge Wells NHS Trust (MTW). She later decided to progress her career in hospice care.

Louise explains, “I had always had an interest in palliative care so when my daughter was a little bit older, I took on a nursing role at the Hospice in the Weald. I also started outreach training at West Kent College, whilst working at the hospice, and found I liked sharing knowledge and teaching other people.”

During her time at the hospice, it made her think about her own mortality and, when she inherited some money she decided to follow another passion of hers and enrolled into Horticultural College.

Louise said, “Gardening is something I really enjoyed, so I combined working at the hospice with doing a course at college. During this time, I did a few gardens, but in 2007 gardening really took off and I decided to do it full time and left the hospice.”

But for Louise nursing was always part of her and even with her gardening clients, many of whom were quite elderly, she would take on a caring role with them.  She says, “Nursing is in my blood and is something that never leaves you. Someone once said that if you opened me up, I would have nurse written through me like a stick of rock.”

Louise carried on gardening until 2017 but then decided she needed more stability and went back to nursing. As she had let her NMC registration lapse she returned to MTW as a clinical support worker (CSW) in August 2017.

In September she enrolled in a three-month return to practice course at Canterbury University. Louise says, “I was happy to see how things went in the CSW role. I wanted to regain my confidence as I had not been nursing for a while, but my manager encouraged me to do the return to practice so I just decided to go for it.”

MTW paid for the course, but didn’t pay whilst she completed her clinical practice, so she had to continue working as a CSW. The course takes three months and because of the length of time, Louise had been away from nursing she had to do 100 hours of clinical practice over the three months. Louise said it was really hard work as she had to work at the same time to support herself but was worth it. She passed and joined the trauma and orthopaedics ward at Tunbridge Wells Hospital as a Band 5 nurse in 2018.

In 2020 she was promoted to a Band 6 Junior Sister, and in January 2022 made a Band 6 Clinical Skills Facilitator. Louise was a bit hesitant at first about going for the Junior Sister role, so she initially took this on as a secondment.

Louise explains, “I was apprehensive because I am a very hands-on nurse and wasn’t sure if the role would be right for me.  I believed that the higher you go the less the role is about nursing and caring for patients and more about management. But the Trust supported me and helped me make the decision, so I agreed to do it as a secondment before I took on the role permanently.

“I found I really enjoyed it. I still spent a lot of time doing clinical work, but I was also mentoring students and new nurses on the ward. I had enjoyed teaching people when I worked in the hospice and one of the things, I’m keen to do is pass on the knowledge that I’ve gained over the years.

“A lot of this is about basic care such as mouth care, which sometimes gets missed. Cleaning a patient’s teeth, if they can’t do it and they’ve been in hospital for a few days, can make them feel so much better. It’s these small things that are often overlooked which make a big difference in patient care.”

As well as the clinical side of her role, Louise is now involved with coming up with new initiatives and working alongside new nurses who join the Trust. Her role is about ensuring safe practice across the team and providing good learning and development, so nurses can reach their full potential.

She says, “I work with new nurses, many who have joined from overseas and have taken a big step to move countries. I help to reassure and support them, so they can gain confidence in their skills and adapt to our way of working.”

Louise highly recommends working at MTW as they have supported her throughout her career to reach her potential. Now in her 50’s she is pleased to be doing a role she didn’t even know existed a few years ago and sharing her skills and knowledge.

Louise adds, “The Trust has always encouraged me to progress, even when I may not have felt ready at the time. My passion for nursing never left me; it is part of who I am, and I’m delighted I made the decision to return to practice. The role has changed a lot since I started, and nurses today take on a lot more responsibility.

“In fact, in many ways, nurses are like the junior doctors of previous generations and the role has expanded, with nurses needing many more skills, but it’s also the basics that are important.  My role enables me to still have patient contact and provide the outstanding care the Trust is renowned for, but at the same time pass on what I’ve learnt over the years to the next generation of nurses.”