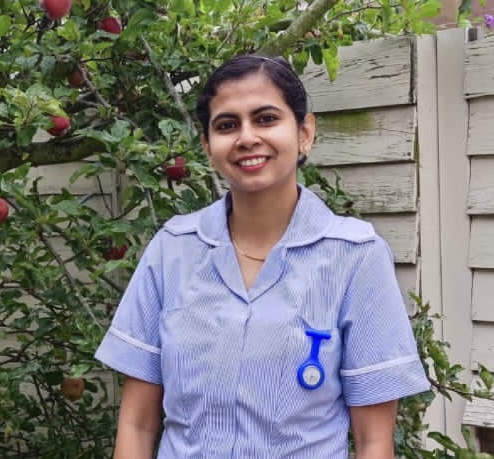 From Kerala to Kent – one nurse’s relocation journey

Nurse Godwill Mathew has made a life changing career decision last year by moving her life from Kerala in India to Kent to join the nursing staff at Tunbridge Wells Hospital.

Godwill qualified as a nurse in 2015. She graduated from Government College of Nursing, Thiruvananthapuram, Kerala in India.

She worked as a midwife for a year before deciding to embark on a two-year nursing master’s degree to specialise in medical surgical nursing and critical care from Government College of Nursing, Kottayam, in India.

With a master’s under her belt, Godwill started working as a medical nurse on a medical ward, the area of nursing that interested her most.

During this time, she made the huge decision to move to the UK. Her cousin had relocated on an overseas recruitment programme and was working at Maidstone and Tunbridge Wells NHS Trust (MTW). She was happily settled and working in an Acute Medical Unit.

Inspired by her cousin, who said MTW was a wonderful place to work, and that Kent was a safe and beautiful place to live, Godwill applied directly to MTW to join their overseas recruitment programme.

Her application was successful and soon, with the help of her cousin and the HR team at MTW, she relocated to Tunbridge Wells.

Godwill’s first challenge was to complete the Objective Structured Clinical Examination (OSCE) examination, which all international nurses must complete to register with the Nursing and Midwifery Council (NMC) and work in the UK.

During the training period, Godwill was provided with hospital accommodation for three months free of charge, which was a huge benefit.

Another benefit was the quality of the training she received from the OSCE teachers and trainers.

Godwill describes the training as ‘fabulous’ – the ‘best teachers I have ever had, and I can’t compliment them enough.’ Not only were they knowledgeable and skilful, but they also provided the trainees with a lot of help and many practical sessions before the exam, so Godwill felt confident sitting her exam.

The training was a mixture of classroom training combined with practice on the wards and, having arrived in the UK in June 2021, by October Godwill was working as a band 5 registered nurse on an Acute Medical Unit.

She says the hospital staff from the matron to her nursing colleagues were highly supportive – particularly when she first started in the Acute Medical Unit and this amazing support has enabled her to work independently with confidence and provide comprehensive care to patients.

Currently Godwill is working in the Trust’s Acute Medical Unit doing long days and night shifts which she is enjoying. She says it is challenging as there is often an urgent need to stabilise patients before they are moved to another ward, however, she is learning new skills and improving her knowledge of acute care all the time, which was a major goal.

Godwill is now living in Tunbridge Wells which she loves as it is close to the hospital and near to her cousin and for the near future is focused on building her nursing career at MTW.